The story is called "A Brooklyn Christmas". It is about Christmas in the Brooklyn part of New York City in the early 1900s. It was written by Betty Smith. K.Glat is the story teller.
Christmas was a wonderful time in Brooklyn. But holiday was in the air long before it came. The first sure sign of it was the windows of the stores. You have to be a child to know the wonder of a store window filled with dolls, sleds and other playthings. And this wonder was free for a girl named Francy. How exciting it was for Francy to walk down the street and see another store all ready for Christmas. The clean shinning window was filled with cotton to look like snow. On this cotton snow, were boxes filled with dolls, dolls with golden hair, and other dolls which Fanrcy liked even better, their hair with the color of rich coffee with lots of milk in it, owned the deep blue eyes that looks straight into a little girl's heart. Francy had never had such a doll. Her doll was a little one that costed only 5 cents. Then there were the sleds for sliding across the snow. One sled had a flower painted on it, a deep blue flower with bright green leaves. The sleds had a wonderful names painted on them too, Rose board, Megnolya, Snow King, The Flier. Francy thought if I could only have one of those, I would never ask god for another thing as long as I live. There were other beautiful toys in the store windows. And Francy felt weak from looking at so many wonderful things and thinking about them so hard.
A week before Christmas, evergreen trees began arriving in Francy's part of Brooklyn. Christmas tree sellers tied ropes along the street. They put the green trees against the ropes and sold them to people who want to buy. All day, the sellers walked up and down their little street of trees. The air all around smelled of the sharp green branches, the smell of Christmas. A few people stopped to choose a tree. They would ask the seller to keep it for them until the day before Christmas. Then they will take their tree home and cover it with colorful paper, glass balls and lights. Some people stopped to ask the prices of trees. But most people came just to look at the trees, to touch them or break a tiny branch to release the wonderful smell. The air was full of the fresh green smell of the trees. The poor little street in Francy's neighborhood was truly wonderful for a while. There was a cruel custom in Francy's part of Brooklyn. It was about the Christmas trees that had not been sold by 12 o'clock midnight on Christmas Eve. A custom was this, after midnight, the sellers will give away the unsold trees to children, but getting one was not easy. The seller would throw a tree at a child who wanted it. If you caught it without falling down, you could keep it. But if you fell down, you gave up your chance for a free tree. 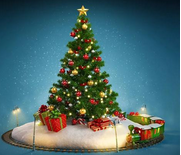 Before midnight on Christmas Eve, children will gather around the unsold trees. The men would throw each tree in turn starting with the biggest tree. Many children would try to catch a tree. But only the strongest, roughest boys would try to catch the big trees. The littlest children waited for the littlest trees. They screamed with happiness when they caught a Christmas tree. On this Christmas Eve, Francy was 10 years old. Her little brother Nily was nine. Mother agreed to let them have their first try to win a free tree. Francy had chosen her tree earlier in the day. She had stood near it all afternoon, hoping that no one would buy it. To her great happiness, the tree was still there at midnight. It was the biggest tree, more than 3 meters tall. The tree's price was so high. No one could buy it. The tree man took this big tree out first and got ready to throw it. Before Francy could speak, a big rough boy, 18 years old, stepped forward. He demanded that the man throw the tree at him. The man hated the way the big boy was so sure of himself. He looked around and asked "anybody else wanna take a chance on it?" Francy stepped forward, "me, Mister." The tree man laughed. So did the children, and a few grown-ups gathered to watch the fun. "Aha, go on," the man said, "You are too little." Francy argued, "me and my brother will not too little together." She pulled Nily forward. The man looked at the 2 of them, a thin girl of 10 who looked as if she did not get enough to eat, a thin little boy with light hair and round blue eyes. "Two catchers is not fair." shouted the big rough boy. "Shut your mouth." the tree man said. "These two kids got nerve. Stand back the rest of youth. These kids is going to have a try of this tree." The other people stood in a line making a kind of path. Francy and Nily stood at one end. The man with big tree stood at the other end. The man raised his arms to throw the great tree. He saw how small the children looked. For the breathless moment of time, the man struggled within himself. "Oh Jes," he thought "why don't I just give them the tree, say merry Christmas, and let them go. The tree means nothing to me. It is too late to sell it this year. And it will not last till next year." The children watched the tree man as he stood there in his moment of thought. But he said himself again. "If I did that, all the others will expect me to give them free trees, too. And next year, nobody would buy a tree from me. They would all wait until I gave them away. I'm not a big enough man to give away this tree for nothing. No, I am not big enough to do a thing like that. I have to think of myself and my own children." The tree man made his decision. "Oh, what the hell, these 2 kids is got leaving this world. They've got understand it, they've got a learn to give and to take punishment. And bye god. It is nothing but take, take, take all the time in this world." He threw the tree with all his strength. And as he threw it, his heart scream to him "it is a dirty, wrong, lousy world."
With the smallest part of second, time and space have no meaning to Francy. The world stood still as something dark and terrible came through the air toward her. The tree blocked every memory of her life. There was nothing, nothing, but the sweet smelling darkness. And something that grew larger and larger as it flew at her. Francy almost felt as the tree struck them. Nily fell to his knees. But she pulled him up fiercely before he could go down completely. There was a powerful swishing sound as the tree settled around them. Everything was dark, green, and sharp. Then Francy felt pain at the side of her head where the tree had hit her.
When some of the older boys pull the tree away, they found Francy and her brother standing up holding hands. Blood was coming from cuts on Nily's face. But Francy and Nily were smiling. They had won the biggest tree. Some of the boys shouted "Great." Some people clapped their hands. And the tree man shouted "Now, get the hell out of here with your tree. You damn lousy kids." Francy had her rough words like those all the life. Such words had no special meaning to her or the other people on the street. The hash words came from people who had few ways to express their feelings. Such words could mean many different things. It depended on the way they were spoken. And the sound of the speaker's voice. So now, when Francy heard the tree man called her and Nily damn lousy kids, she smiled. She knew he was really saying, "goodbye, god bless you."
You have been listening to a special story for the Christmas holiday. It is called "A Brooklyn Christmas". Your story teller was K.Glat. Our story was written by Betty Smith and appeared in her book "A Tree Grows in Brooklyn". It was adapted for Special English by Carolin Viver, by permission of Harper and Roll publishers.